Marlian president, Naira Marley has replied Dencia after she threw shades at his Colleagues, Davido and Burna Boy.
We earlier reported that the Cameroonian singer, Dencia threw shades at Davido and Burna Boy for the second time after acquiring her customized, metallic gold Rolls Royce. She referred to the them as Niggas who were fight over Basic Rolls Royce when she has three packed in her garage.

She advised the duo to never talk about Rolls Royce or dream of flaunting it on the internet cause they were still novices in the business. She also disclosed she has been in the business of purchasing luxury cars since 2014 whereas Burna Boy and Davido acquired theirs in 2020 and 2021. (See post here)

After her tweet hit the internet, Naira Marley decided to step in and fight for his colleagues. Reacting to her shade, Naira Marley took to Snapchat to throw shades at her too. He asserts Dencia who is yet to pay for the cars she claims she bought with ‘Oil Money’.

He backed up his fact with the American method of payments (credit card) that allows a customer purchase an item and gradually pay the item’s money in bits.

According to Naira, any car bought outside Africa is regarded as Finance and it’s not owned by the individual, in this case Dencia is not a proud owner of 3 Rolls Royce.

He laughed at her and told her directly he doesn’t care about how many cars she has in her garage, if she is still paying for it, it is finance. 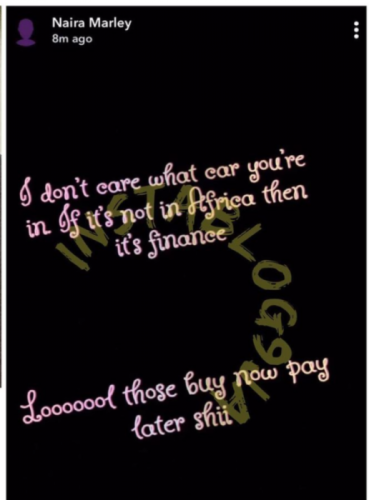 Rayman Ft. Otega – Me Vs Me