Two armed men are arrested for driving from Virginia to Philadelphia in a Hummer and ‘planning to attack convention center’ where ballots are still being counted
Trump, who held a 675,000-vote lead early Wednesday but by Friday morning there was just 22,000 votes separating the two candidates.

Philadelphia police have arrested two men who were allegedly involved in a plot to attack the Pennsylvania Convention Center on Thursday night.

Police were tipped off, possibly from a concerned family member of one of the men, who had driven the 300 miles from Virginia in a Hummer.

It’s thought the plan was to possibly carry out an attack at the convention center where votes from the election are still being counted.

Police have taken both men into custody during which point a weapon was found according to 6ABC.

Inside the Convention Center, workers have been tallying hundreds of thousands of votes cast by Philadelphia residents.

In Philadelphia, 358,644 absentee and mail-in ballots have been returned so far. 84 percent of those have been counted, and 58,642 more need to be counted.

Pennsylvania is among a handful of battleground states Trump and Biden are narrowly contesting as they seek the 270 electoral votes needed to win the presidency.

One arrested over a planned attack on Pennsylvania Convention Centre in Philadelphia where presidential election votes are currently being counted. The motive of attack is yet to be deciphered, but it was gathered that the hummer car the “suspects” arrived in have been impounded 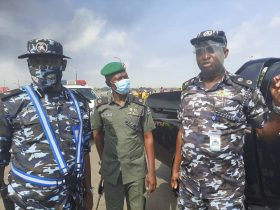 Why SWAT was Quickly set up – Minister of Police Affairs, Muhammad Dingyadi